The Magic of Moonbeams …MOONSTONE 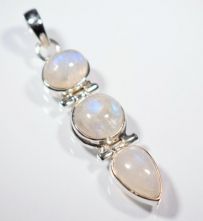 Mans’ love of Moonstone is one that has come down through history, with many cultures and faiths revering this delicately coloured gem over thousands of years. The power and mystery of the stone was believed to be aligned to that of the moon, with its name being gained because of the mysterious shimmer within it that resembles the moon’s iridescence. Although moonstone comes in a wide variety of colours, it is the inner silver bluish iridescence that is highlighted as the stone is moved – known  as ‘adularescence’ – that is often the most popular.

As far back as Roman times moonstone was being set in jewellery and it had a more recent renaissance in the Art Nouveau period. Today is as popular as ever for its versatility and the icy fire it shows when set against Sterling silver.

As with many of the traditional stones, many myths have grown up around it. The Romans believed that the stone was made up of many moonbeams that have been pressed together. In Arabian cultures, moonstone  was often worn on female garments as a sign of fertility. And in India, it was highly regarded as a magical and holy gemstone; often used as  a  dream  stone’  to bring the wearer  beautiful  visions at night. Statues of gods are still adorned with it and today it is often given as a wedding or anniversary gift. Known as the loving stone, it is believed that if two people hold a moonstone in their hands under a full moon they will fall deeply in love.

Today moonstones are often given to people going on long journeys, continuing the ages old tradition of giving moonstones to guide travellers on their way.

For those who believe in the powers of crystals, moonstone is often associated with healing and well-being, new beginnings and fertility, is said to soothe emotional instability and stress and promotes good fortune in love.

Together with Alexandrite and Pearls, Moonstone  is one of the birthstones for June, so if you are looking for an unusual birthday gift, why not visit us at www.silver54.co.uk to see our range of original pieces.